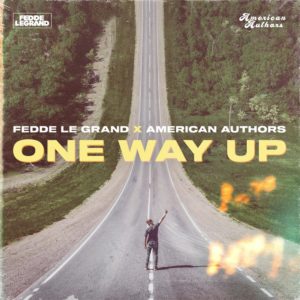 Dutch star DJ Fedde Le Grand has an incredible track record of solo hits – like his banger “Put Your Hands Up For Detroit” from 2006 – and is celebrated for his lit festival performances and chart topping remixes, but another major pillar of his incredible success story consists of his collaborations with other artists. Most recently, he has teamed up with the US indie rock band American Authors for their new joint single “One Way Up”, which is set to be released via Virgin Records Germany on February 18, 2022.

In a world that’s grown noticeably tired after two years of pandemic life - and with seemingly no end in sight - this single is the perfect reminder to never lose hope.  American Authors’ Zac Barnett explains it as follows: “We all get knocked down, but that shouldn’t stop us from moving forward. ‚One Way Up‘ is about recognizing life’s struggles and fighting through the hard times.” And Fedde le Grand adds: „I hope this song will motivate people and make them positive. Especially now with all things going on in the world it’s important that we don’t give up.“

Sonically, “One Way Up” is any crossover connoisseur’s dream come true, and sure to captivate fans of various different genres alike: an opening that sees Barnett’s raspy voice describing sinister scenarios along to dark, heavy sounding chords leads to an emotional, anthemic bridge and ultimately a drop that kicks off into an utterly optimistic, uplifting and explosive refrain. It’s the best of indie rock melancholy and house music’s magic knack to empower and invigorate, blended into one irresistible mix.

With American Authors having accumulated over 1 billion streams and 6.6 million monthly listeners on Spotify, as well as hundreds of millions of YouTube views with global hits like “Best Day Of My Life“, while Fedde Le Grand is a permanent resident at the top ranks of DJ Mag’s Top 100 each year since 2007, also garnering hundreds of thousands and millions of views, followers, and listeners along the way, this collab sees the coming together of two musical forces to be reckoned with!